There are some combinations of flavors where, unless you’ve actually it before, you really don’t know what to expect.

We thought we knew what to expect based off the individual ingredients that go into making kyinkyinga, but we turned out to be so off the mark.

We were wrong… in a really pleasant and highly enjoyable way.

There’s one area in Ghanaian food culture that’s on a major upswing, and that’s the chop bar.

As a part consequence to rapid economic development, better incomes and overall improved employment for the Ghanaian working class, there’s been a quickly growing preference – especially among those living in major urban areas – towards eating outside of the home and for more on-the-go convenience foods. For some, eating while on the move even acts as a subtle symbol of affluence.

For the most part, it’s the multitudes of chop bars that are able to meet these increasing demands for what you could call “fast food.” While a “chop bar” more broadly refers to a social setting where you can go and eat a good meal (“chop” is local slang meaning “to eat”), the definition also technically sheds light on the pseudo-informal street food industry.

We say “pseudo-informal” for the street food industry because although it is not heavily regulated nor are there strict central quality standards, the industry itself is huge. One particular study estimated that there were over 60,000 street food vendors in Accra (Ghana’s capital) alone combining for an industry turnover of $100 million per year!

The Definition of “Fast Food” in Ghana

Granted, there are places to go in Ghana where you can find “traditional” types of Western fast foods like pizza and fries and fried chicken. A survey study into Ghanaian fast food habits, however, suggests that there’s also a very distinct local and Ghanaian flair to the types of fast foods on offer.

At any given chop bar, you might want to try waakye, or a hearty Ghanaian delicacy made from cooked rice and beans. Or there’s kelewele, a dish of fried plantains served with roasted peanuts. In case you’re in the mood for something cooked in a banana leaf, then you might want to try the kenkey on the menu.

Of course, there’s also kyinkyinga, one of the lesser starchy chop bar offerings… and the focus of the rest of this post going forward. 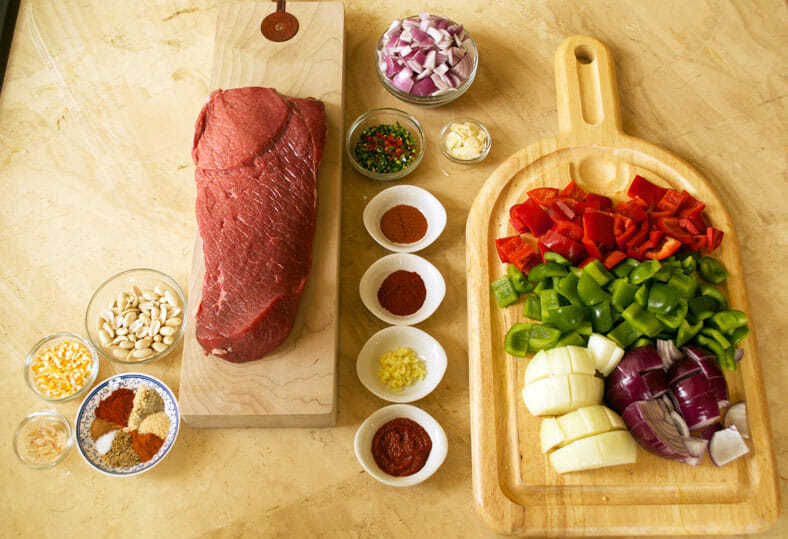 When making kyinkyinga (pronounced “chichinga”), there are three chief components you need to consider for this sumptuous kabob.

First, there’s the meat. Kyinkyinga can be made with virtually any kind of protein (even a vegetarian option if you so choose), although it traditionally started out as a recipe made with a more savory darker meat like beef and/or liver. Nowadays, especially with the strong uptick of on-the-go eating and chop bars, chicken is also a fairly common meat used for kyinkyinga. Whatever you choose, though, the best advice we can offer is to make sure it’s enough of a hearty meat that can be cubed into large pieces and won’t dry out when grilled.

Next, there’s the marinade. Most commonly, the marinade is made with an oil and tomato base and can include various aromatics like garlic, jalapeno, onions, etc. Even before the tankora powder enters the fold, you can opt to spice up your marinade with various spice powders and mixtures as well. The simplest way to make your marinade would be to put all ingredients together into a food processor or a blender and to create a thick pourable paste. Just keep in mind that the goal of your kyinkyinga marinade is twofold: first to add a base flavor to the meat and to your kyinkyinga, and second to act as a coating to which your tankora powder can stick. 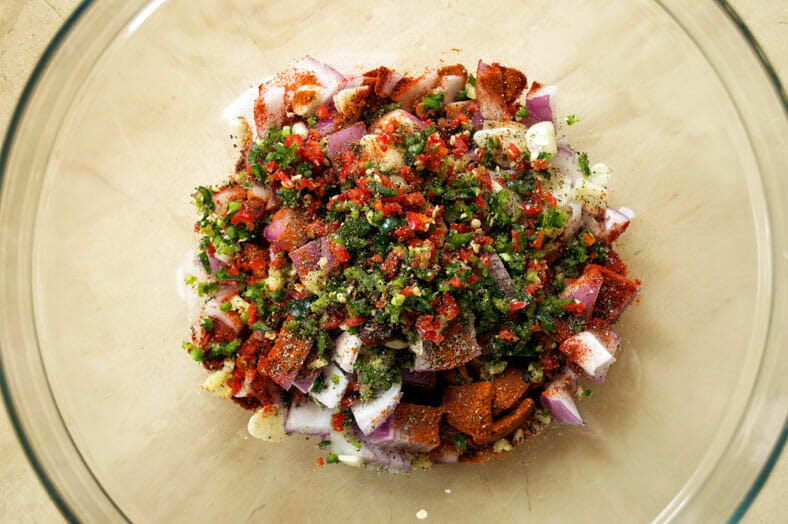 Which brings us to the third and final piece to the puzzle, the tankora powder. This ever-so-crucial piece introduces a subtle but incredibly sophisticated flavor to your kyinkyinga on the whole. It also introduces the one true must-have ingredient in the recipe (and in broader Ghanaian cuisine for that matter): the groundnut. All types of groundnuts – although the peanut is most popular – are a true staple in Ghanaian foods and a significant source of protein, fat and carbohydrates in the cuisine. If you need a bit of a (totally unadvised) shortcut, you can make your tankora powder simply ground up peanuts and mix it with ground powdered spices like ginger, cayenne and red pepper flakes. But if you’re willing to make tankora powder as it should, it’s very well worth it. You’ll start by roasting both your peanuts and dried corn kernels over a low heat until they’ve both reached a nice brown color. From there, you’ll combine them with an assortment of spices and blend them together in either a spice grinder or food processor until you have a crumby texture. Be sure not to over-process, though, or you’ll end up with a really spicy and flavorful peanut butter! Actually, that might not be such a bad thing… Once you have your tankora powder made and your meat well-marinated, you start to assemble your kyinkyinga by dredging your marinated meat in the tankora and then directly onto your skewers. Depending on your preference, you might swap between meat and vegetable on the skewer itself, but that’s totally up to you. With skewers made, throw them on the grill for a few minutes on each side, et voila! You’ve made yourself a fresh batch of delicious kyinkyinga! Before talking about our own tips and tweaks, we have to really commend the visibly empassioned work done by the creator of Betumi Blog, the author of our original reference kyinkyinga recipe and for tankora powder too. Across these recipes as well as several of the other posts on the blog, it’s quickly very clear how thoughtful the content really is.

With regards to our own version of kyinkyinga, though, we did opt to make a few adjustments. For our meat, we chose a nice cut of London broil beef from our local butcher, which came out fantastic in the overall kyinkyinga.

For the marinade, we substituted dried chili flakes for fresh whole jalapeños and, of course, we added more garlic to the mixture. And in the absence of a good peanut oil, we used olive oil in our marinade as well as for brushing while the kyinkyinga was on the grill.

Finally, for the tankora powder, we made the subtle switch of roasting corn kernels instead of raw popcorn. Next, we substituted dried shrimp for maggi, nutmeg for its “sister spice” mace, and added smoked paprika and onion powder to the overall mixture. Part of the rationale here was to opt for a slightly less processed version with ingredients that were more readily available in our kitchen. The extra spices were an add simply because they were similar in flavor and we’re fans of what they can add to anything grilled.

Other than that, there is very little else that we’d want to adjust to an already amazing kyinkyinga recipe. The complex and multi-faceted nature of the flavor is both one we didn’t expect nor one we’ll forget anytime soon.